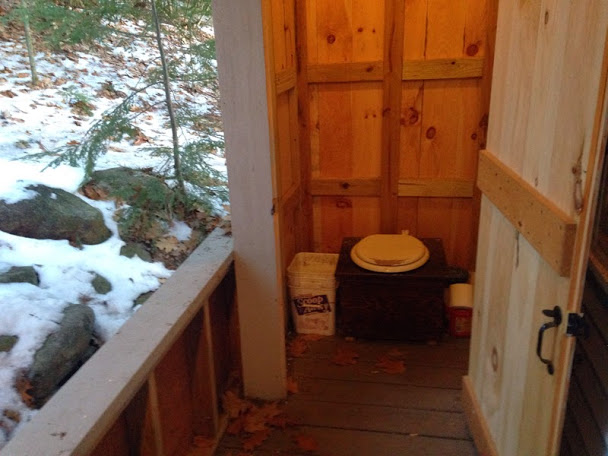 2015 marks my 20th year composting humanure, also known as human poop. In that time I’ve managed numerous compost piles, scrubbed countless buckets, read The Humanure Handbook about five times, built a variety of structures to serve as outhouses, had numerous outhouses built by others, and created a lot of soil.

What started me down the humanure path took place in 1995 when I participated in a month-long primitive camp in the Alaskan bush. We dug pit toilets, which quickly became stinky and surrounded by flies. I learned a lot during that experience, not the least of which was that there had to be a better way to deal with poop when you had no infrastructure. A few weeks after I got home I learned about a recently published book in which the author described the simple sawdust toilet and composting system he had been using for 20 years, as well as the science behind why it worked and was safe. It was the answer to the problem I had, so it was like a light going on in my head. The author was Joseph Jenkins, and the book was The Humanure Handbook.

While still not mainstream, today the idea and practice of sawdust toilets and composting humanure is much more widespread. While still on the the fringe, it’s nowhere near as far out on the fringe.

With 20 years of experience under my belt, I feel as though I’ve streamlined the process as far as I can. At our folk school, where the compost piles are a short walk from the buildings, I’ve gone to a single-stream, where all the kitchen waste goes into the toilet buckets. It makes trips to the compost pile simpler (buckets with handles are easy to carry), but also more frequent.

At the field school, we’ve gone with a “no outside inputs” system for months at a time, where we use forest duff instead of sawdust, rainwater to clean the buckets and grass/weeds harvested with a scythe to layer the compost pile. Keeping it simple and on-site has been something I’ve worked really hard to refine so as to make it doable for those just getting started in self-sufficiency.

I’ve had many interactions with people who were quick to point out that it was different than what they did at home, and a few who said it was gross and tried to ridicule me about it. I think they expected me to back off because it isn’t mainstream. When questioned, I go directly into teacher mode, explaining how and why it works. When ridiculed, I turn the tables and point out flaws in the current norm. I’m neither shy nor afraid to go on the offensive against ignorant people spouting stupid comments.

After using humanure as the catalyst to a robust composting system all these years, flush toilets just seem idiotic; part of the problem, not the solution. They have their place, such as in densely populated urban areas, but they are only a transportation system, not a way to intelligently manage the resource. I’ve spent time visiting people who had only flush toilets, and I always looked forward to getting back to the bucket toilets and couldn’t do so quickly enough! Inexpensive systems that are ecologically sound and require no infrastructure and minimal materials and inputs are the future. Flush toilets are the past.

So after 20 years of experience, here’s what I have to say. Septic systems and sewers fail, create pollution, and require capital and offsite inputs. Humanure systems don’t fail, create a resource and require no capital or offsite inputs. The difference is that septic systems and sewers are a turn key solution and can be used by anyone, even if they don’t know how they work. Humanure systems need to managed well to work well.

I owe a huge thanks to Joseph Jenkins for writing and publishing that book. It’s had a huge impact on me personally as well as the Jack Mountain Bushcraft School and all of the people who have come through it over the years. I’ve never met the man, but he’s definitely one of my heroes.

A new scientific truth does not triumph by convincing its opponents and making them see the light, but rather because its opponents eventually die, and a new generation grows up that is familiar with it.
– Max Plank