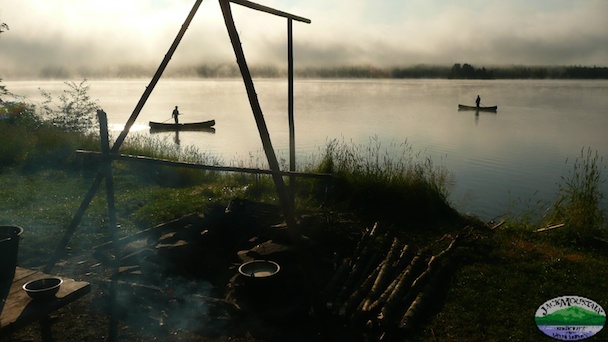 The 2014 Wilderness Canoe Expedition Semester was an amazing month on the river. Everyone spent the month in a solo boat, but they were our 18 and 16 foot Prospecters, not small boats designed for solo use. Everyone also used a paddle that they had carved and a pole that they had made. These were prerequisites for the trip; making your own gear.

Due to wildly fluxuating river levels on the Aroostook, we decided to change our original plan of poling up 60 or so miles from the field school to the top of drainage and traveling a loop to the two-phase plan we’ve used in the past. For phase 1 we put in at Chamberlain Bridge and canoed north to Allagash Village. We took our time, exploring the out of the way sections of the waterway.

We met several interesting people along the way. First, there was the woman on the solo trip who had come down the St. John river and poled up the Allagash. I heard she later did the Mud Pond Carry and headed to the Penobscot. We met her at Long Lake Thoroughfare.

There was also the Dutch couple who were completing the Northern Forest Canoe Trail when we met them at Allagash Falls. They were on day 43 of their trip.

And there were the countless bald eagles, moose, otters, and other wildlife encountered along the way.

It rained a lot during the trip, but the biggest storm we saw was on our last night on the river. We were camped at Big Brook, and it rained hard for hours. As a result of the storm, the river flow went from around 600 cubic feet per second to near 6000! The river came up several feet overnight, but as we always pull our canoes up high and dry we didn’t lose any gear.

After a resupply day at the field school, we again went to Chamberlain Bridge to begin phase 2 of the trip, but this time we headed south. Our journey took us through Telos Lake, down the Telos Cut, down Webster Stream and on to the East Branch of the Penobscot. This is a much trickier whitewater run that ended up having 9 carries (known outside of Maine as portages), but it was beautiful and remote.

In all we traveled Maine’s north-south spine. Some members of the party talked about paddling the Penobscot down to tidewater at a later date to complete the journey.

The worst part of the trip was definitely the end. We had worked hard each day, everyone got along great, and the rhythms of the woods life were completely comfortable. But in the end we had to return to the world and our team disbanded.

Those are hard moments for me. When you’ve been through so much with people and they’ve become like family, it sucks and it’s difficult to shake hands and promise to keep in touch. It’s part of the job, and there will be alumni trips in the future to look forward to, but it still sucks when a team disbands and people go their separate ways.

We’ve got lots of photos and video, as well as countless memories, and my face still hurts from laughing so much. But now that I’ve had a few nights at home I’d love to be hitting the trail with that team again tomorrow.

To summarize the trip, I’d say great people came together as a team and traveled through some beautiful country living the woods life, and much was learned and experienced. My life is richer as a result of the experience.

Previous: The half-mile carry around the Hulling Machine rapid on the East Branch of the Penobscot. …

Next: Cooking dinner on the East Branch of the Penobscot.  Tripod with a galley pole. …