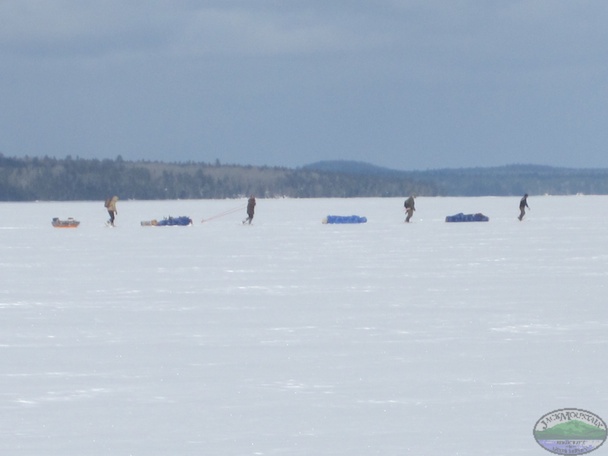 The Snow Walker’s Rendezvous is this weekend in Fairlee, Vermont. If you’re interested in traditional winter gear and techniques in the north, it’s one that you shouldn’t miss. I’ve been going for 15 years, and it keeps getting better. This year I’m traveling with Paul Sveum, who will be presenting on the 21-day Boundary Waters snowshoe expedition he led last winter, and Derek Faria of The Woodsman School who will be attending for the first time.

There are a lot of things to love about the Snow Walkers, and here are a few of my favorites.

The Tents
I’ve never seen, and don’t think I’m ever likely to see, such a wide variety of canvas tent styles erected in one place. Each year there is a tour of the tents, where the owners talk about the design, what they like, what they don’t like, what they’d do differently next time, etc. It’s a great education on canvas tents.

The Skills
On Saturday there are breakout sessions where experienced people teach skill workshops on a variety of topics that are useful to the winter traveler. I’ve never walked away from the event without learning a new skill.

The People
It’s the people that make any event. My impression of the people I’ve met there over the years is that they’re accomplished and welcoming. A few years ago I remember speaking with a woman about something related to northern travel, but I had no idea who she was. Five minutes later she was on stage presenting about her 20th (or some other ridiculously high number) unsupported trek to the north pole, and leading the first all-female trip there. It’s representative of lack of pretense I’ve found in the people at the event. Everyone is there because they love traveling in the winter. It’s also where I met a guy named Les Stroud years ago.

The Food
I’ve been to a lot of different events, but the food at the Snow Walker’s is the best I’ve had. Not to be missed.

I’m looking forward to seeing old friends and meeting new ones. I hope to see you there.

Next: Chest-deep in the lake for 20 minutes taking the dock out today