What Guarantees On Gear Mean 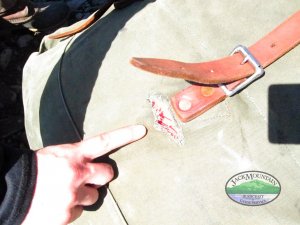 A guarantee on a piece of gear doesn’t mean it won’t fail. It means that if it does fail, the maker will stand behind it and repair or replace it. This is a good policy, but it doesn’t help you when you’re on a remote trip.

This past spring I guided a 105 mile trip on the St. John River in remote, northwest Maine. We covered the distance in a week. On the third morning my pack ripped. It’s a Duluth Pack heavy duty #4. The canvas under the middle buckle tore as I was closing it.

I use a waterproof liner (heavy-duty trash bag) in my packs, so my gear stayed dry, but it was an annoyance because I couldn’t cinch the bag tight and it took up more space in my boat than I had planned. Not a big annoyance, but big annoyances often result from a combination of small ones.

I’m not writing to malign Duluth Pack and their gear – It’s a canvas pack and can be repaired with a patch. I’m writing to ask you to keep in mind that gear fails, and if you’re totally dependant on it, when it fails life gets much more difficult.

Don’t let a guarantee on a piece of gear give you the idea that it will never fail. Before you depart on a either a short trip or an extended expedition, ask yourself what you’ll do if each piece of gear fails. It’s better to have a plan in advance for these possibilities than to make it up after it fails.

Previous: Failure Is The Price Of Tuition For Learning

Next: Austin, Texas For The Winter And Spring