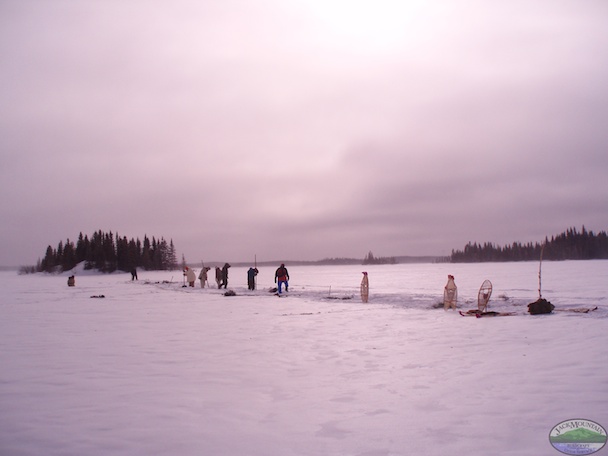 They’re trickling in from far and wide. England arrived yesterday. Texas and Chicago tomorrow. Ohio, Connecticut and California on Thursday. New Hampshire is ready to go. Alberta and Montreal are meeting us on the road.

In two days our small group (on the Jack Mountain calendar as the Subarctic Snowshoe Expedition With The Cree) is headed 500 miles north of Montreal to Ouje-Bougoumou, Quebec. There we’ll meet up with my friends David and Anna Bosum, who will be the guides to our small group. We’ll snowshoe out to a bush camp where we’ll immerse ourselves in their culture. living the timeless rhythms of the subarctic winter for a week. Not a class in the modern sense, I’ve heard David describe the experience as, “Come and stay with us and see how we live.”

There are lots of things to learn by watching and doing. Setting a gill net under the ice. Setting snares for snowshoe hares. Joining David on his trap line, reading the tracks and hearing stories about individual animals. Carving snow shovels. Eating bush meats such as beaver, lynx, moose and goose. All of these things are referred to as skills by modern people, to be collected and categorized. But the context matters. Here they aren’t skills, they are culture.

I’ll admit that I’m hooked, and have been since my first trip with David and Anna. There are other things on my bucket list for the north; canoeing northern rivers, running dogs on the sea ice, and exploring the rugged, beautiful country are several of them. But while the land around Ouje is beautiful, it’s the people and the culture that are the most striking.

In the USA, extended stays in the wilderness are undertaken by fit people in the prime of their life. It’s often an adversarial relationship, especially in the popular culture that leads us to believe the bush is a dangerous place waiting to test us (Man Vs. Wild, anyone?). For the Cree, the land is home. It isn’t a battle or a struggle. In addition to the usual mix of 20-40 somethings, there are infants and the elderly living and spending time at the bush camps. It’s not something they do one weekend per year, it’s the way of life. This is what rejuvenates me every time I return north; that example they live that the land is home.

People in America grow more distant from the land with each passing year. Experiencing a culture where that isn’t the case and where people have a real, non-superficial relationship with the land is fascinating and beautiful. To be amongst people who know that as the land goes, so go they is fundamentally different from being amongst people who will pay lip service to protecting the environment by putting a sticker on their SUV.

It’s an amazing and, in my life anyway, unique experience; living with people on their ancestral land where the traditions have never been lost or broken. In a few days I get to visit my northern friends again. The temperatures will be cold, maybe colder than -40, but the warmth of friendship will temper the frigid air. And I get to share it with a small group who will be experiencing it for the first time.

Next: On the road to northern Quebec!