Minimum Or Displaced Impact – About Leaving No Trace 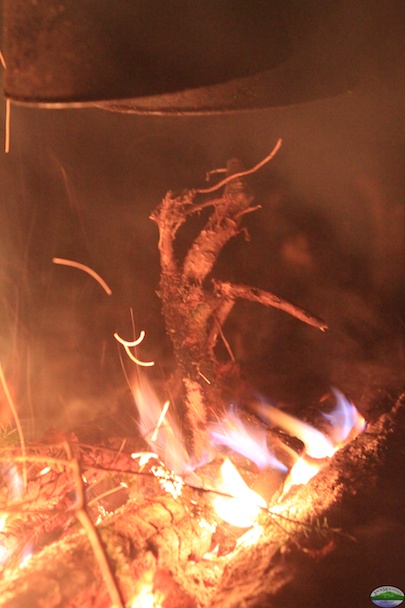 Something we discuss in great detail in our courses is the difference between minimum impact camping and displaced impact camping. Modern camping practices are far from minimum impact; things such as rare metals and petroleum products put a huge burden on our planet. But since the effects of their processing and production aren’t usually visible where people recreate, modern hi-tech camping gear is seen, and marketed as “minimum impact”. But step back and view the world with a larger perspective and it’s simple to see that this isn’t the case. There is a huge impact, but it’s displaced – meaning the impact is visible but not in the area where the gear is used.
Paul Sveum, an ESSP graduate and assistant instructor, is a student at Northland College in Wisconsin and recently sent me the following paper he wrote on the topic.

When I was in my backpacking stage of life, before canoeing spoiled me to real camp food, wool, and canvas, I was the model of the leave no trace ideology. I used an ultra-light stove, aluminum cook pots, and plastic forks and spoons. (actually only half a fork and half a spoon to cut down on weight) At night I used a plastic and nylon tent and slept in a synthetic mummy bag. I would go to sleep in my synthetic cocoon reading Abbey or Thoreau by the light of my led headlamp. After packing up in the morning, I could barely tell where I had been that night, and felt good slogging down the trail knowing the next campers would only see a patch of matted down grass. But did I really leave no trace?

At first survey, we would say yes, the environment was left as it was found, but if we pull back our field of vision to the global level, a new picture is shown. It’s a global picture of oil fields and refineries, open bauxite mines and aluminum smelting facilities, industrial rubber plantations, and of toxic living and working conditions created by these industries. On top of the negative global environmental effects of Leave No Trace ideology comes the isolation of viewing nature with a look but don’t touch policy.

To get us all on the same page, leave no trace camping was developed in reaction to a growing number of people recreating in our national parks and other public lands in order to preserve the integrity of the land for future visitors. There are seven main points: plan ahead, travel on durable surfaces, dispose of waste properly, leave what you find, minimize campfire effects, respect wildlife, and be considerate to other visitors. All of these are good examples of conscientious backcountry behavior, and I want to express that I don’t think LNT is wrong by any means, it is a useful tool; especially when teaching young kids how to act in a wilderness setting. But when these ideas are followed as gospel is when problems arise.

First, it is impossible to go anywhere without leaving a trace. As active participants in life on earth, we humans cannot exist without affecting that which lives around us, either for good or bad. The idea that it is possible to travel through a wilderness area and leave no trace encourages a futile effort; let me explain. Dan Tryon, owner of Purcell Trench, a camping gear manufacturer out of Washington tells this story: “I was hiking in the beautiful granite high country of California, stopped near an exquisite lake and noticed that the large stone in front of me had been a camping spot for hikers the night before. They had done a consummate job of Leaving No Trace. I found cut fir boughs back in the brush. The boughs were used to sweep the entire area. On close inspection, it was clear significant damage had been inflicted on the lichens living on the large flat stone…” The only way to truly leave no trace in the backcountry is to stay home.

The advice from the LNT viewpoint is to use modern camping gear, and seeing how there are approximately, last time I counted, 3.5- 3.6 trillion gadgets, gizmos, and articles of outdoor gear, it appears this is the most popular choice. Dartmouth College’s LNT web site agrees, “Select appropriate equipment. Lightweight stoves, free standing tents, and collapsible water containers.” The fact is that most of the products used to allow us to camp at that pristine campsite and leave no trace came from somewhere, and that somewhere, or someone is not always following the same LNT ethics as you are.

Plastic, aluminum, nylon, and rubber are the main materials used in modern camping gear, and except for a few eco-responsible companies, all have disastrous effects on local and global ecosystems. While the outdoor gear industry represents a relatively small piece of the global market, consuming and polluting far less than major players like the automotive or defense industries, the nature of the product demands high environmental standards.

Aluminum comes from bauxite which is mined from the ground, leaving craters in the Earth and local drinking water contaminated. When the bauxite is smelted into aluminum, an enormous amount of energy is consumed and an equally large amount of man made greenhouse gasses are produced, about 1 percent of the total global amount of greenhouse gasses. Industrial rubber plantations first require large amount of usually equatorial rainforest to be leveled. Then the plantations slowly deplete the ground of nutrients, which leads to the loss in quality of the primary ecosystem. Finally, the oil industry has a long and sketchy environmental history, with accidents ranging from the Exxon Valdez spill to the drilling in the much opposed Arctic Wildlife Refuge drilling. Obviously these materials that are used in camping gear are not in agreement with the environmental ethics of most campers, so why do we continue to use them?

There is nothing appealing to me anymore about crawling into a plastic smelling, dank, dirty plastic tent at night after a long day out in the fresh air. We go to the woods for many reasons, but one of the most important is so that we as humans can feel again what life is like on Earth without the sensoral deadening of our modern society. So why is it then that we insist on wrapping ourselves in plastic and nylon at night? Even though we may stay dry or keep ourselves away form the creepy-crawlies, we are effectively cutting ourselves off from the wild at that point, well I guess except from a hungry bear to which a tent would only prove to be a wrapper.

So what do we do then if we should be responsible backcountry travelers without the plastic and metal gear? We can reuse material or make our own gear from old materials. There is an abundant supply of canvass and wool at second hand store and army surplus stores. With a little creativity and a little perseverance, just about anything can be made in your own home. I have made backpacks from used canvass duffle bags that mimic Duluth style packs, stoves from old coffee cans, and tents from pieces of plastic and tarp from construction sites. As campers, we need to realize that we don’t need the top of the line products in order to have fun and be safe in the backcountry.

Also we can use natural, local materials like aspen saplings, fir boughs, and buckskin to provide ourselves with the necessary gear for camping and outdoor life. As anyone who lives in Northern Wisconsin can attest to, there is no shortage of aspen, alder, or birch saplings in the area, which all represent good materials for a number of projects. They represent good local, renewable resources, not only because of their abundance, but also because of their growth pattern. A large amount of saplings, anywhere form 2 to twenty, will shoot up from one root cluster, but as they age, all but one or two will die off naturally because they are all shade intolerant, which means if we trim them when they are young, we are merely taking out trees that will die soon anyway.

There are alternatives to using natural materials or making our own gear, such as buying organic cotton clothes and products using “green” nylon, but such materials are limited in what they are used in and often times expensive and hard to find.

The answer lies somewhere between the two, using some processed products, say if we want to carry a tarp or piece of canvass to keep dry, but instead of aluminum poles using local, natural materials like saplings to hold it up. It is up to us to take responsibility for our actions, if we want to camp and spend time in our pristine wilderness areas, let the price for such behavior not be the destruction of an ecosystem on the other side of the earth, let it be paid from our local lands.

The underlying theme to all of this is common sense. If you are going to use modern gear, be aware of where it is coming from, and if you don’t like it, find something better. If you are going into the wild to connect with the land, don’t take anything that is going to separate you from it, and plan on using what you can find along the way. Remember that knowledge is lighter than gear.

Now when I am camping it looks more like this: A fire is burning the dead, dry wood I gathered, yes using an axe. No longer am I eating cold oozy camp food, but fresh sourdough biscuits and soup, cooked over the open fire, which I eat with a whole fork and spoon. I carry a tarp, I know it is not globally responsible, but I do like to stay dry, but instead of tent poles I use green saplings. In conjunction with the fire, I use a wool blanket to stay warm, even on the coldest nights negating the need for a sleeping bag. You still may catch me nodding off to Edward Abbey, no longer to the piercing light of a headlamp, but now to the soft glow of a beeswax candle.