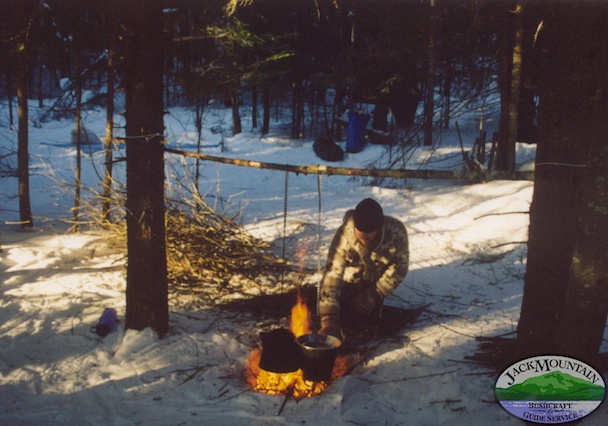 This morning it was warm and raining, with a strong wind out of the south. At about one pm, the wind began to shift, moving to the southwest and eventually to the west. As this was happening, it began to get cold again. A cold front was blowing out the warm air mass, and because the pressure difference between the high and low was so great, the wind was really blowing. It didn’t take long to get back down to zero degrees (F), and soon the slushy snow was replaced with crusted ice.

The wind continued to increase in speed all afternoon. After dark we all had dinner in one tent after cooking a salmon casserole on the woodstove. It was about two hours after dark when we heard a tree in the distance come crashing to the ground. A minute later, we heard another, much closer tree crash down. Just a few minutes later, we heard a large crack from a tree directly overhead. Immediately we went out to investigate. It was a big, mature tree, and I figured that there was one chance in 1000 that it would come down that night. But with the big winds, the moisture turning to ice, and the knowledge that if it did come down, it would land right on the tent, I decided to change our sleeping arrangements for the night.

Instead of four people in the second tent, there would now be six. Me and one of the guys from my tent would sleep out. It was supposed to be about ten degrees below zero (F), cold but not a big deal compared to what we had been living in. So we set up a tarp and moved our sleeping bags to it. When we were set up and the others had arranged the second tent (which was about 60 yards away from the first and safe from the tree), we took down the tent and stove and packed them.

With the excitement finished, we all settled down for a restful night. I slept better outside than I had in the tent the last few weeks. I awoke several times during the night to watch the moon and stars, then just as the first light came over the horizon, I awoke and watched the first rays of the sun appear. Where there had been pools of water on the lake yesterday, now was glare ice. If I had had a pair of skates with me, I could have skated the entire 18 miles of the lake.