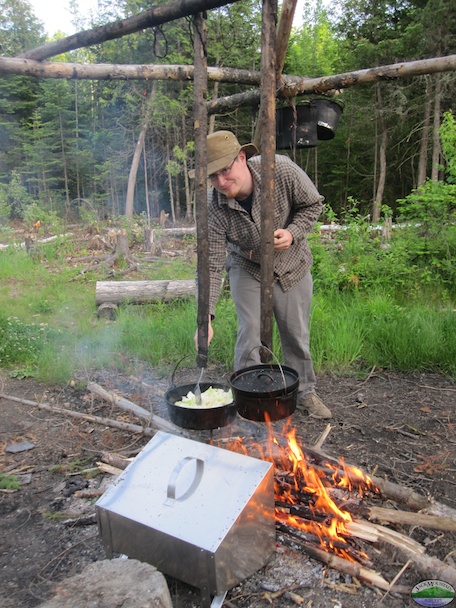 I’ve had a bunch of reflector ovens over the years and they’ve all shared one thing in common; bake pans that aren’t a standard size.  After threatening to do so for several years, when we took off the river June 2nd I took a small, non-folding reflector oven and a standard half-sheet pan (13″ x 18″) to a nearby sheet metal shop and asked them to make me a non-folding reflector oven with roughly the same angles as the small oven to fit the half-sheet pans, which are pretty easy to obtain.

Four days ago I picked it up.  At first I thought it didn’t look right since it was significantly deeper than other ovens I’ve used, and it looked short for the depth.  Each night since then we’ve made several rounds of sourdough biscuits (plain, jalapeno, cheese, etc.) to put it through it’s paces.  It’s performed like a champ so far; superior to any reflector oven I’ve ever used.  With all of the others, we’ve had to flip the pan around halfway through the baking process because it’s that much hotter in the front than the back.  With this oven, the back cooks almost as fast as the front, eliminating the need to rotate the pan.

I won’t bring it on trips because it doesn’t fold, but for around camp it’s filled a big niche.  Because it uses standard-sized pans, it’s no trouble or big expense to have a bunch of those pans here.  We can then mix up huge batches of dough and bake for a large group, switching out pans as they’re done cooking.

Two of our teaching assistants informed me today they’re already scheming to have this design mass produced in order to sell them on the web.