The Knight Of The Spike-Sole Boots 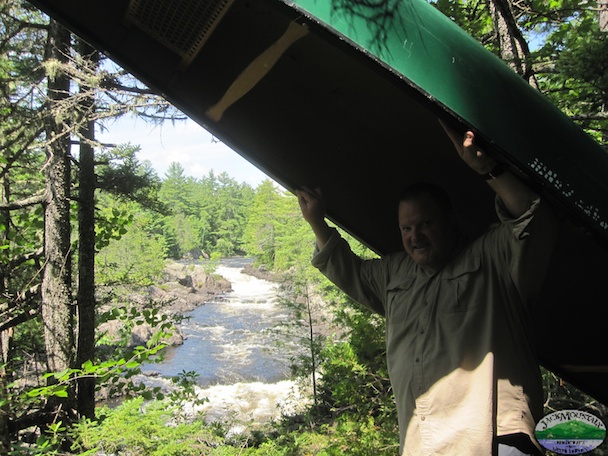 The book of poetry titled Pine Tree Ballads was published in 1902 and has some great pieces about the north woods of Maine.  The Knight Of The Spike-Sole Boots by Holman Day tells the story of a sport who tried to run the Hulling Machine on the East Branch of the Penobscot River.  I’ve run the East Branch and seen the Hulling Machine from the carry trail.  The top of it is visible in this photo, and it continues on for quite a ways.

They had told me to ‘ware of the “Hulling Machine,”
But a tenderfoot is a fool!

Though the man that’s new to a birch canoe
Believes that he knows, as a rule.

Into fret and shoal to tumble and roll
In the welter of Schoodic rips;

But knowing it all, as a green man does.
And lazy, as green men are,

I hated to pack on my aching back
My duffle and gear so far.

So, as down the rapids there stretched a strip
With a most encouraging sheen,

I settled the blade of my paddle and made
For the head of the “Hulling Machine.”

It was simply the plan of an indolent man
To save his back and his breath.

For I reckoned I’d slice for the left-hand shore
When the roar of the falls drew near.

And I braced my knees and took my ease —
There was nothing to do but steer.

(There are many savage cataracts, slavering for prey,
‘Twixt Abol’jackamegus and the lower Brass- u-a,

But of all the yowling demons that are wicked and accurst,
The demon of the Hulling Place is ugliest and worst.)

Now the strip in that river like burnished steel
Looked comfortable and slow,

But my birch canoe went shooting through
Like an arrow out of a bow.

And hissed and laughed at my racing craft
As it drove on its headlong ride.

I sagged on the paddle and drove it deep,
But it snapped like a pudding-stick,

Then I staked my soul on my steel-shod pole.
And the pole smashed just as quick.

There was nothing to do but to clutch the thwarts
And crouch in that birchen shell,

And grit my teeth as I viewed beneath
The boil of that watery hell.

I may have cursed — I don’t know now—
I may have prayed or wept,

But I yelled halloo to Connor’s crew
As past their camp I swept.

I yelled halloo and I waved adieu
With a braggart’s shamming mien.

Then over the edge of the foaming ledge
I dropped in the ” Hulling Machine.”

(A driver hates a coward as he hates diluted rye;
Stiff upper-lip for living, stiff backbone when you die!

They cheered me when I passed them;
they followed me with cheers,

That, as bracers for a dying man,
are better far than tears,)

The “Hulling Place” spits a spin of spume
Steaming from brink to brink,

And it seemed that my soul was cuffed in a bowl
Where a giant was mixing his drink.

And ’twas only by luck or freak or fate,
Or because I’m reserved to be hung,

That I found myself on a boulder shelf
Where I flattened and gasped and clung.

To left the devilment roared and boiled.
To right it boiled and roared;

On either side the furious tide
Denied all hope of ford.

So I clutched at the face of the dripping ledge
And crouched from the lashing rain,

While the thunderous sound of the tumult
ground Its iron into my brain.

I Stared at the sun as he blinked above
Through whorls of the rolling mists,

And I said good-by and prepared to die
As the current wrenched my wrists.

But just as I loosened my dragging clutch,
Out of the spume and fogs

He was holding his pick-pole couched at Death
As though it were lance in rest,

And his spike-sole boots, as firm as roots,
In the splintered bark were pressed.

If this be sacrilege, pardon me, pray;
But a robe such as angels wear

Seemed his old red shirt with its smears of dirt.
And a halo his mop of hair;

Than he of the drive who came alive
Through the hell of the “Hulling Machine.”

He dragged me aboard with a giant swing.
And he guided the rushing raft

Serenely cool to the foam-flecked pool
Where the dimpling shallows laughed.

And he drawled as he poled to the nearest shore,
While I stuttered my gratitude

“I jest came through to show that crew
I’m a match for a sportsman dude.”

There are only two who have raced those falls
And by lucky chance were spared :

Myself dragged there in a fool’s despair
And he, the man who dared!

I make no boast, as you’ll understand,
And there’s never a boast from him;

And even his name is lost to fame —
I simply know ’twas “Jim.”

If Jim was a fool, as I hear you say
With a sneer beneath your breath,

So were knights of old who in tourneys bold
Lunged blithesomely down at Death.

And if I who was snatched from the jaws of hell
Am to name a knight to you.

Here’s the Knight of the Firs, of the Spike-Sole Spurs,
That man from Connor’s crew!