The Slow Life Movement – Wilderness Living at the Field School 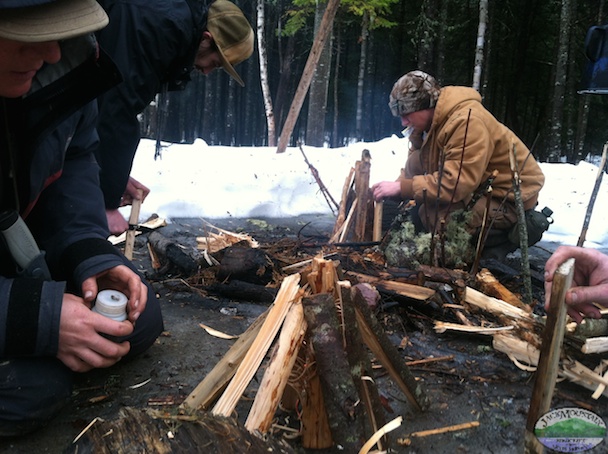 Note: This is the first in a series of guest posts by our senior instructor Paul Sveum.

There was a TV commercial I saw last winter while I was out in Montana that I thought of today as we are set to begin our 2014 Spring Wilderness Bushcraft Semester. The scene opened with a happy family eating breakfast, both parents looking sprightly and vivacious with two or three little kids at the table causing all the usual ruckus that little ones are known for- throwing food, taunting each other, dumping orange juice on the cat. The next scene faded into a split shot of both parents, I assume at work, looking a wee bit stressed and not the least bit amused by the demanding boss, the blinking phone line buttons and the soup that was accidentally spilled on the dad’s sport coat at lunch. The closing act showed the parents that night, looking like drop-outs from an Ironman race- hair frazzled, eyes showing a pit of dismay and mild despondence and jaws slack leaving a mixed look of utter exhaustion and resignation. But alas, their day was not yet over as the carpet was obviously in need of a vacuuming and the neighbors were coming over for dinner- what ever shall they do? Then like a little magic time saving wizard, a robotic vacuum flew in from the ether and saved them from the torture of yet another chore for the day- apparently all these people needed was a self propelled vacuum.

Why you ask, have I been thinking about a cheese ball TV commercial while living out in the woods? The life we live out here during the Wilderness Bushcraft Semester is slow paced by today’s standard, we wake early with the sun and go to bed after the moon has come up (so to speak). The days seem to be full of time, and frankly, I can’t remember a time during last autumn’s semester when I thought “Gee, I wish there was more time in the day.” This isn’t because we are short on having fun around here, it is due to the fact that each one of us only has so much energy to expend throughout the day and living outdoors the way we do gives us plenty time to put that energy to good use. When your life is dialed into Nature time, you have the time to experience a full day and go to bed tired, happy and ready to do it again.

The loop many people get into involve systems that instead of “saving” time often times tend to steal it. Think of the robotic vacuum cleaner, I can’t remember how many low low payments of $19.95 it took to get one of the babies in your living room, but it wasn’t cheap, but it was saving you time, right? On the surface, maybe, but when you account for the hours you spent (in the form of time at work) to buy that machine and the hours a large house (a house apparently so large it is not possible to keep clean) takes from you (think mortgage, maintenance), the cost/benefit ratio doesn’t smile so nicely on our little friendly robot. Put succinctly: we spend so much time maintaining our lives; lives that require us to sacrifice alot of our time to keep that life viable – we are left with usually only an hour or so each night and a few hours of the weekend of “free time.” Of course, some jobs are very fulfilling and worth the time it takes from us, but I fear many people are working their time away only to keep their lifestyle afloat.

I have worked for many years learning live on Nature’s pace year round and I know that the cadence of life we assume at the camp is temporary for some of the folks here, but to anyone who comes through this program, time will likely not be viewed the same again. I have seen the child-like look of appreciation people get during this course when they talk about how great it is be tuckered out from fun and satisfying work instead of from 8 hours of monotonous labor, when they realize they are hungry for calories from living an active, fresh aired life and not from some arbitrary time on the clock, when they are slowly cooking dinner over an open fire instead of the slam bang style of a hurried microwave meal, and when we are enjoying the company of the woods and each other around the fire at the end of the day.

Previous: Our new 10'x20' cabin, to be a library and student study area, is complete. …

Next: Ordered a second copy of 'Making The Attikamek Snowshoe' for the field school…