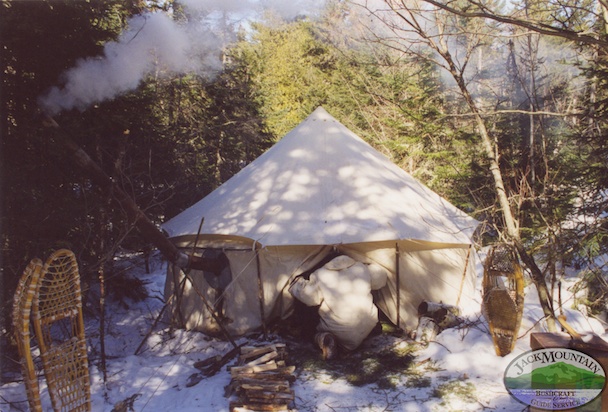 It’s no secret that I love the winter. When the mercury drops and the snow falls, most people leave the forests, not to return again until spring unless taken there by a gas-powered contrivance of some sort. It makes even a few acres of woodlot feel like a vast wilderness when the wind is howling and the snow is swirling. For those of us fortunate enough to be able to spend blocks of winter camped in the big woods north of Katahdin, it can be unforgettable. There’s a lot of physical work required to live well, especially when compared to warm weather camping, but with the extra work come extra rewards.

Paul Provencher, one of my favorite authors, had some beautiful things to say about living out in the winter. This passage is from his autobiography titled Provencher; Last Of The Coureurs De Bois. Obviously I love the last line. But I also love the progression of how it begins with the practical wisdom of how to live. And only after this practical bit is finished does he become philosophical. I think it’s much like a winter trip. You can’t really sit back and reflect until the work is done.

In order to make ourselves as comfortable as possible, and give the men time to pitch camp before nightfall after we’d moved (for we lived a really nomadic existence), I used to go ahead and use my snowshoes to flatten out the track we would be using; this gave the snow time to harden, thus allowing the dogs to move their loads along at top speed. If you were traveling alone, or with a guide, then you had to do the job of tramping down the site you’d chosen for your night’s encampment on your own. You usually went about it by taking off your snowshoes and using them to beat the snow down to ground level. Then you’d spread a thick layer of fir and spruce branches, to serve as flooring and mattress. You would also scatter branches outside the entrance, to act as a carpet and stop your feet from sinking in.

Then the thick night falls over the forest, and the frost comes down like an axe on the little camp. But the wise trapper has not been wasting his time; and it may truly be said that his efforts have been successful. Once the canvas has been stretched over the framework, and the snow banked up all around the sides, and the stove is nice and warm, and there’s a haunch of beaver in the pot – then he can slip into an almost total state of well-being – even though he may not yet fully realize that right then and there, in the heart of the woods, he is living through the best moments of his life.