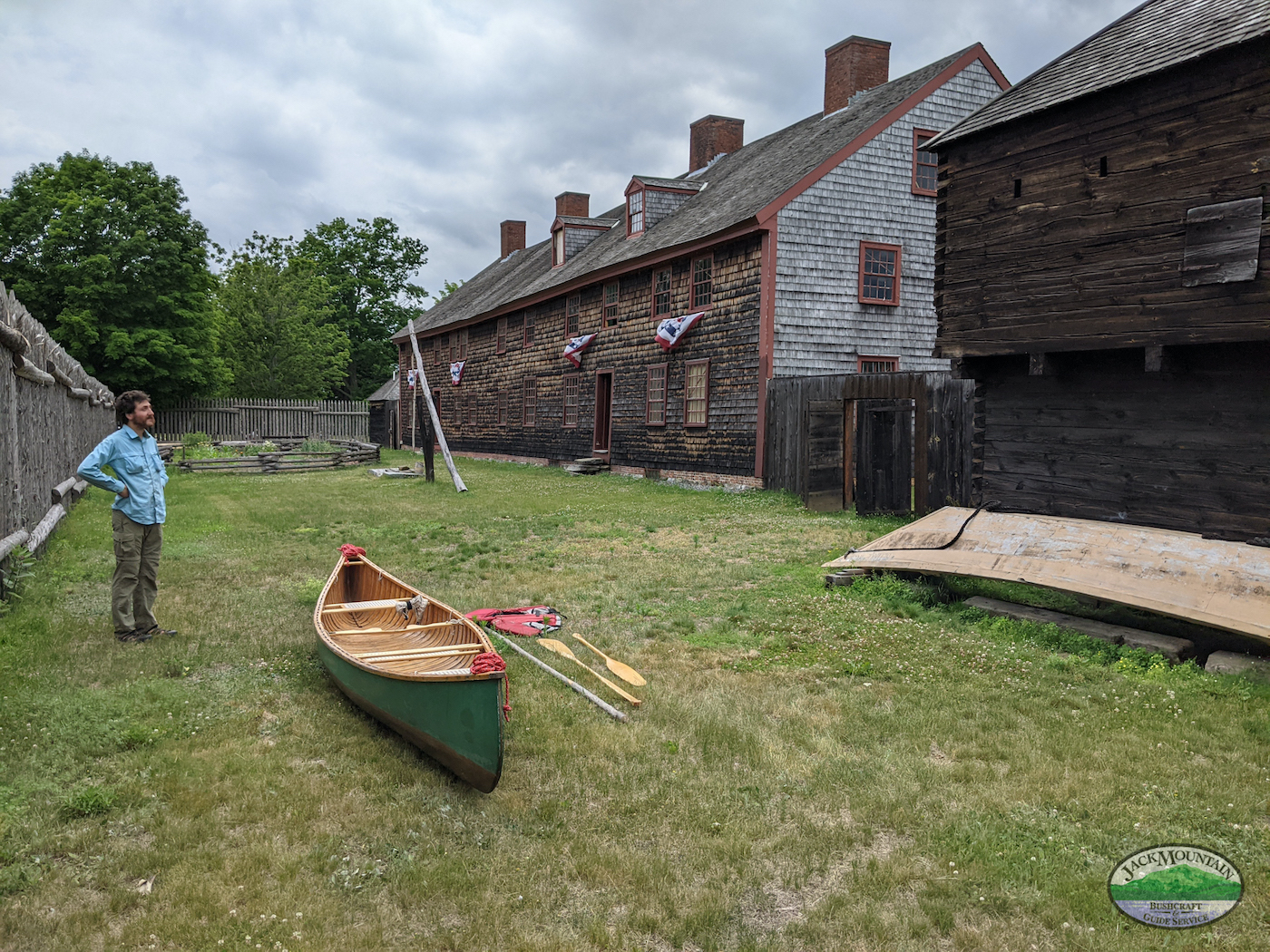 A number of years ago I crossed paths with Ezra Smith on a canoe course. He went on to build a wood canvas canoe, then traveled in that canoe the length of the Northern Forest Canoe Trail. I was guiding a trip on the Allagash when, on the last leg of his journey, he walked into our campsite. I heard from him recently, and his most recent trip in his wooden canoe. He traced the Maine portion of Benedict Arnold’s revolutionary war expedition to Quebec. This is his story, in his words.

——————————————————————————
As I began to paddle up the North Branch of the Dead River, excitement mounted as news of the scheduled midsummer hurricane reached me. Benedict Arnold and his men were fighting their way upstream in the midst of pouring rain 246 years ago. My adventure was much more serene than Arnold’s mid October fiasco because the hurricane passed me.

I paddled and poled the Arnold Trail from the back yard of the Colburn House to Arnold Pond in Coburn Gore. I had been thinking about Benedict Arnold and his Trail for years. In 8th grade I studied the patriotism and ultimate betrayal of the infamous Benedict, and since then I have wanted to know more of his story. I learned about his role in the Battle of Saratoga, and the monument to his left leg which contains no mention of the man himself. My fascination with Arnold became more relevant when I read about the 2017 re-enactment of the Arnold expedition. Little did I know the attack on Quebec depended on 1000+ soldiers fighting their way through the wilderness of Maine with leaky and heavy boats and shoddy maps to boot. They encountered many mishaps despite their plans. As my plans for paddling the Arnold Trail matured, my interest in following in their footsteps was not to recreate their treacherous journey, but rather to experience history from the seat of my canoe instead of my living room armchair.

I enjoy a quiet day on the lake as much as anyone, and a night of cards while listening to loons calling is quite pleasant, but sometimes I strive to push myself. When Arnold and his company agreed to their assignment from General Washington, they did not do it because it would be easy or leisurely, they did it because it would be hard. They each wanted a chance to prove their patriotism and bravery by undertaking a secret and dangerous mission with a high risk of failure. There is this spirit in all of us to some extent, so four years after reading that article I found myself camped out by the Kennebec River in Pittston, Maine preparing to ride the tide to Fort Western. My ultimate destination would be Arnold Pond, right on the Canadian border. The next morning I pushed off in my handcrafted boat below the Colburn House, where Arnold and his troops loaded up their freshly built wooden boats, and headed up to Fort Western in present day Augusta. After touring the fort, my canoe was left overnight next to a model of the boats that were used in 1775. I constructed my wood and canvas canoe in 2017 and used it on my thru-paddle of the Northern Forest Canoe Trail.

My trip up the Kennebec River was filled with herons, portages around dams, and camping in questionable locations. The rains had not come yet, and the river was low. If it were not for the controlled releases from the dams, I would have spent a lot less time paddling and poling and a lot more time walking. Houses became fewer and fewer as I went up the river, and the traffic on the roads thinned out each day. I landed on Arnold’s Landing by the Moscow Dam and took a stroll down Arnold Lane in Anson. The path that the army took in 1775 has changed, but much is still the same. Unlike Arnold and his company, I could not scale the cliffs in Skowhegan, or paddle up the now impounded Dead River in the shadows of the Bigelows. What I did have was the time and the weather to enjoy the trip. I journeyed through a landscape that has seen log drives, mills, farms, and hydroelectricity.

I neared the Great Carrying Place with a feeling of anticipation. It took Arnold’s company 5-7 days to traverse this area and they nearly gave up at that point. They had to erect a temporary log hospital due to strenuous and unsanitary conditions. I had read much about that 11mi trek and had worked out various plans for completing it in a reasonable time and fashion. As the sun set on July 3rd, I found the end of the portage road widened by Arnold’s men. This road was used for thousands of years by indigenous travelers to avoid the treacherous rapids of the lower part of the Dead River. The road, now a path, is not easy to find coming from the water. I had to go back and forth along the shore several times to be sure that I had the right place. My goal was to leave the Kennebec River at sunrise and watch the sun set over Flagstaff Lake. Though I had a heavy canoe and a mix of modern and traditional gear I also had a cart that the canoe could be balanced on and the packs placed inside. This whole package was pushed along roads, and even on level paths through the woods. This got me to the first of the carry ponds, and from there I paddled and carried my gear to the West end of the last pond. By the time I made it to Flagstaff Lake the last of the light was dying, and I could hear fireworks in the distance. It was Independence Day.

My experience of Flagstaff and the North Branch of the Dead River was very different from Arnold’s, setting off “Into the Howling Wilderness”, and more of a calm journey with pleasant solitude broken only by the occasional car in the distance or a chat with a fisherman. Of the whole trip, this landscape was the closest to what Arnold’s company had seen. On the carry ponds I could look up and see the first sight of the Bigelows, named after one of the officers in Arnold’s expedition. Men from that company reported seeing the first snow of the season high on those mountains. I experienced alder streams, beaver swamps, and smooth “dead” water. By the time that I got to Sarampus Falls the water was just too low. The river was abandoned in favor of the cart, pushing my boat the last few miles to the Chain of Ponds. I got a lift on the way, and I had plenty of time left in the day to paddle the chain and make it to Natanis Point Campground before the sun went down. As I got closer and closer to the Canadian border I thought of all of the beautiful scenery and wildlife that I had seen in the past 14 days. Looking over my shoulder I could just make out the Horns on the Bigelows peering up the valley at me. Perhaps some Arnold’s company did the same, wishing that they were back home and not on that treacherous voyage.

Horseshoe Stream was so low I opted for vehicular assistance. I drove up to Mud Pond for the last push to Arnold Pond, my ultimate goal. With a minimum of gear, I slowly eased my way through the algae and duckweed to the inlet of Mud Pond. To my surprise, there was no portage trail. I expect that only a handful of people are crazy enough to try to get between these two bodies of water via canoe.

Chopping my way through the balsam fir with an axe, I could hear the echoes of the axes of the Arnold expedition ringing in my ears. Humans had been using these waterways to travel from the St Lawrence to the coast of Maine for tens of thousands of years. Arnold and his men where following the route that indigenous travelers and fur traders had taken long before them. A portage trail had existed here before, and may some day exist here again. As I embarked onto the last water body of my journey, I was filled with a quiet alertness. At the shoreline of Arnold Pond, I could hear the swearing of phantoms as they struggled through the undergrowth. Before long I had made it to the other side of the water and gazed after the last of the boats being manhandled by exhausted and starving ghosts. I knew that many of them would lose their lives in the cold swamps ahead of them.

As I drove away from the Coburn Gore that afternoon I looked forward to my first shower in weeks and sleeping in a cozy bed. Humans are seekers of comfort and leisure, always looking for a way to make life easier. But there is another part of us which runs contrary. A part of us that rejects the easy in favor of the difficult and foolhardy. Sometimes an adventure that will test our mettle is needed, where discomfort and hardship are sought after and not avoided. This summer I could have gone to places more remote, gone down the river instead of up, or stayed at camp and paddled around the lake in fair weather. But that is not what those men did in 1775, and I like to think that my own adventure had just enough grit to count for something. 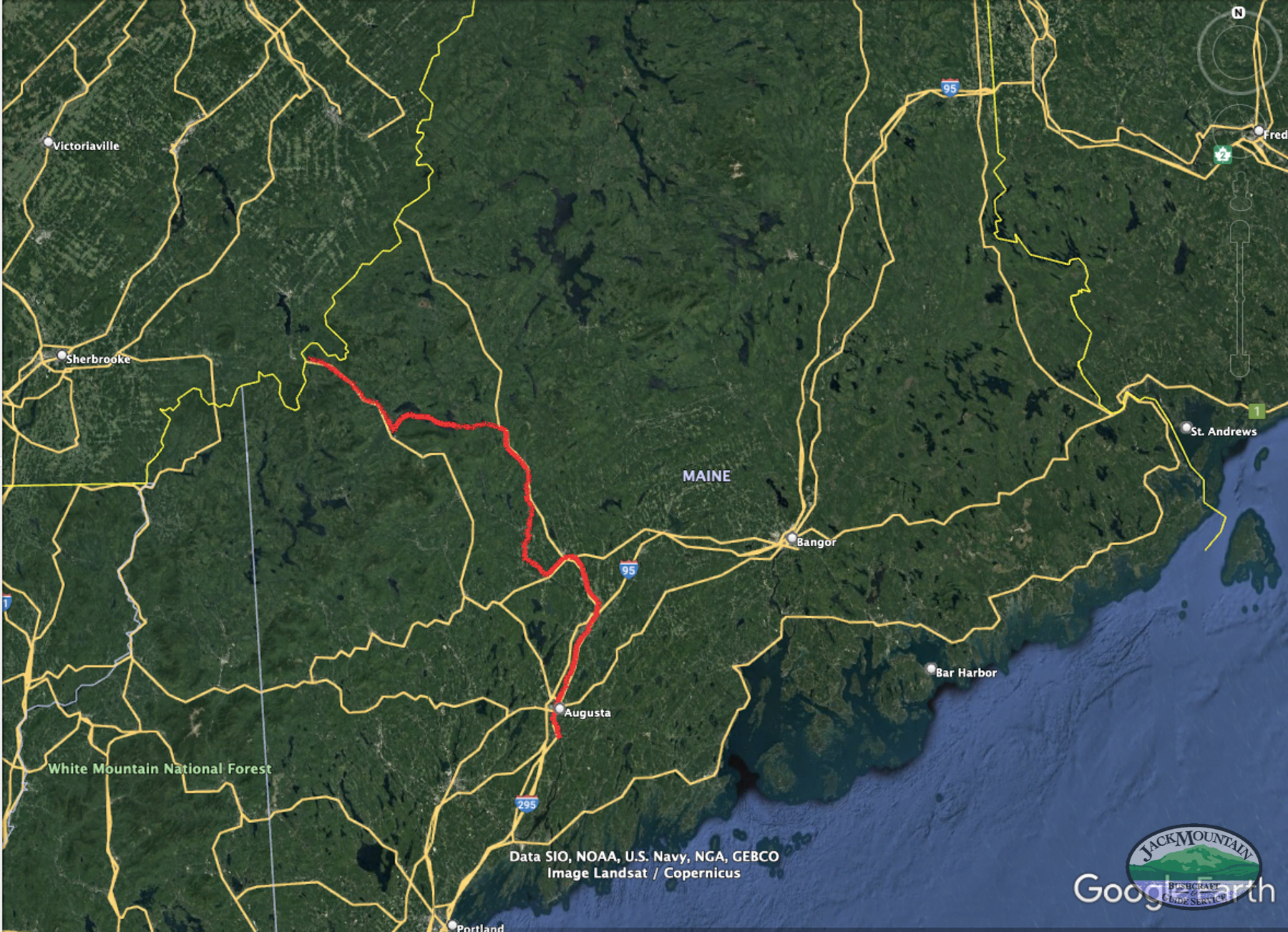 For some background on Arnold’s expedition, check out Arnold’s Trail on the web.

You can contact Ezra via email at ezrasmith93 AT gmail.

Next: Athenaeum: Field School Addition For 2022