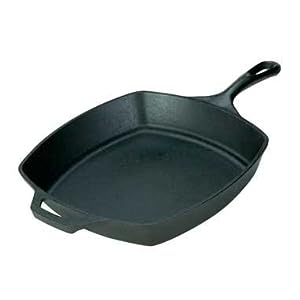 For a trip of any duration, a good skillet ranks just behind the axe, knife and kettle as an irreplaceable piece of kit.

Ever since fellow Maine guide Bud Farwell turned me on to “The One Eyed Poacher And The Maine Woods” during a fall Allagash trip, I’ve been a big fan of Edward Ware Smith’s writing. In his book “Upriver And Down” is an essay about his favorite frying pan that he named “Old Come And Get It.” It was a stamped steel skillet to which he had a special handle attached that would accept a stick in order to give it a really long handle. He used to to cook all manor of wild game, fry potatoes, mix liquor (during prohibition), and many other backwoods tasks. It’s a great essay, and was mentioned by none other than the incomparable Tomahawk on his blog (of which I’m a big fan).

I’ve used stamped steel and cold handle skillets for years, but my favorite skillet isn’t one of them. If I had to carry only one, and I was only cooking for me and one or two other people (not a large group that is usually the norm on my trips), I’d go with my 10.5″ square cast iron skillet.

I’ve got a number of cast iron skillets of various sizes, but the square one is my favorite for cooking outdoors. It is not as good at home as round skillet because most heating elements or burners on stoves are round. This results in colder corners that can act as a heat sink. In actual use this isn’t a big problem; I’ve used mine on electric elements, gas burners, and even the newer glass stovetops, and it hasn’t been a big issue.

Where the square skillet really comes into its own is over an open fire. The square shape is more stable on fire irons than a round skillet because more of it is in contact with the supports. It can also be propped up on its edge, such as when cooking bannock, much easier than a round skillet. The square sides give you the ability to cook more bacon at once, fit several trout at the same time, and is generally serviceable for camp cooking.

I’m in good company, as this skillet was also a favorite of the late Bill Riviere, Maine guide and author.  He wrote that a skillet was referred to as a spider in the north woods of Maine.

Skillet choice is an individual thing. Which one do you carry?

(Link to Amazon, where you can get a square skillet for about $20.)