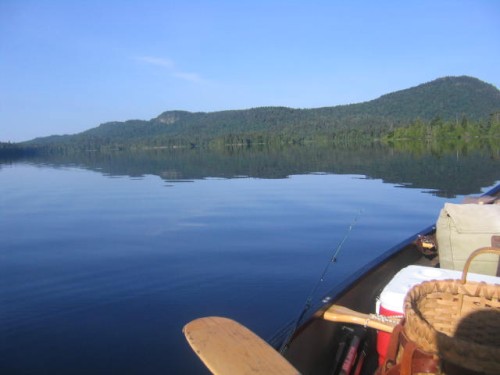 Last week I went on a solo canoe/fishing trip to Allagash Lake and Allagash stream. I put in on Allagash Stream above the lake, where it’s narrow and winding. There wasn’t a lot of water so I poled the entire way to the deadwater above the lake. As I was coming around a corner I looked down and saw a metal grill basket in about five feet of water. I retrieved it with the pole, and will be including it in my cook kit. Ray Reitze has shown me the giant frying pan he found on the bottom of the Musquacook Deadwater, so now I’ve got my own piece of cookware found in the bush.

Before the stream enters Allgash Lake it becomes a deadwater, and there I got out a fly rod and tied on a streamer. I took a few casts, then trolled the streamer behind me as I paddled into the lake. It didn’t take long before I felt a hit, so I set the hook and retreived an eleven inch brook trout – a real beauty. I pushed on to the Ice Caves campsite for a break, then continued paddling to the outlet, where I camped for the night. After unloading the boat I waded out into the water and fished for an hour, catching a few brookies on various flies.

When I woke up the next morning I loaded the canoe and pushed off down Allagash Stream. The water was low and the stream was bony, but fast. I ran the section down to Little Round Pond quickly, then paddled across the pond and unloaded my gear at the first campsite at Little Allagash Falls. After carrying the boat around the falls, I was again headed downstream.

When I came to the large ledge I took the side route that was blocked by a tree across the stream. As my bow butted up against it, I walked up to the bow and my weight was enough to get the boat under the log. Then I walked to the stern of the boat as it barely slipped under the log, before stepping over the log and floating downstream. I’ve used this technique numerous times, and I wondered if there was a name for it.

After running under the bridge and entering the deadwater, it wasn’t long before I was into the vast waters of Chamberlain Lake. After floating around for a while I turned the boat around and poled back upstream. It was pretty simple to get back up to the bridge since the water wasn’t too shallow. As I approached the bridge I tied a lining bridle onto the bow of the canoe and stepped onto shore. There was a deep chute I didn’t think I could get up with a pole, but I figured it would be no problem tracking. I worked the canoe under the bridge and up the chute, then untied the lining bridle and resumed poling upstream.

As I approached the smaller ledge drop I again tracked the canoe over it, and at the larger ledge I lifted the boat over while standing on top of the ledge. Then I came around the corner and once again saw Little Allagash Falls. I carried the canoe around the falls, and was just about to the put in when I almost stepped on a snake who was sunning himself on a rock. He was as surprised to see me as I was to see him and beat a hasty retreat to the safety of a rock crevice. I don’t know what kind of snake it was because it happened so fast, but it was neat to see.

There were loons fishing in the pond near the falls as I loaded my gear into the canoe. When I finished I sat on the rocks and ate lunch while watching and listening to them.

When finished I pushed off and headed across Little Round Pond and the upper section of the stream. The first mile or so of the upper stream passed quickly, but soon I was into the shallower sections of the stream and bottoming out on rocks that slowed my progress from that of a brisk walk to that of a crawl. The trick is in finding the water that’s deep enough to float your boat and gear, but it became harder and harder to find. After unsuccessfully trying every possible way to pole up a section of riffles I stepped out of the boat and tied on a lining bridle, then started walking upstream. The water was just over my ankle most of the time, but with rocks scattered about making the passage of the boat difficult. I searched my memory as my eyes scanned the water trying to remember how I had gotten down this section and looking for water deep enough to pole.

I ascended the rest of the stream this way, by poling and wading, and it was a lot of work. At one point I was stepping onto a rock that was just above the water and I slipped, landing on it flat on my back. If I didn’t have to immediately scramble to get a hold of the canoe as it went downstream with the current I would have laid there on that rock for a while. I was tired and the impact had cracked my back much like a trip to the chiropractor.

Eventually I came to the top of the last riffle and entered the smooth water just below Allagash Lake. It had been six miles of upstream travel and had taken me seven hours. I was physically exhausted, but it felt good. As I entered the lake I tied a fly on and floated around taking a few casts, then set out for the southern part of the lake. Before making camp and sleeping soundly.

I woke in the morning to a mist-covered lake and trout jumping all around. They were feasting on some hatching insects. The scene was one out of a fly fishermen’s dreams, so I packed up and got on the water quickly to take advantage of it.

As the morning wore on and I worked my way across the lake and up the stream toward the put-in, I decided to alter my course and take out at Johnson Pond instead of struggling with the low-water in the upper stream. So I dragged my canoe through the tunnel under the alders and over several beaver dams until I emerged at Johnson Pond, then paddled across to the take out. After unloading my gear I started the four mile walk to the truck. The sun was shining with a few cumulus clouds dotting the sky, and my long pants, long sleeves, hat and headnet protected me from the relentless mosquitoes and horse flies. I had seen about 30 moose, a bunch of osprey and bald eagles, wild brook trout, loons, a snake, and found exactly what I came for.

Next: Book Review: “The Forager’s Harvest” by Samuel Thayer