Arctic explorer Vilhjalmur Stefansson wrote that “adventure is a sign of incompetence.”  But if it isn’t for adventure, why do people do the things they do?  I’m with Stefansson on adventure.  It implies that you’re not prepared for what you face, which, in the case of living a life outdoors, should never be the case.  [...]

Friluftsliv (pronounced: free-looft-sleev) literally means “free-air-life”, and is translated by Roger and Sarah Isberg for their book as “simple life.”  Originally written in Swedish,  it was published and reprinted three times there before being expanded and translated to English. Here’s an explanation of the term by Roger from the introduction; It defines the philosophy and [...]

If you’re interested in keeping up with all the updates we put on the web, check out our FriendFeed page at: friendfeed.com/jmbushcraft It lists all the updates we make on the web, including this blog, photos, videos, Facebook updates, etc.  I’m going to put it on our site soon, but for the time being check [...]

We’re wrapping up week 1 of the Earth Skills Winter Program, and I’m getting all the gear assembled for our snowshoe trip next week.  We’ve had the coldest temperatures of the year so far, but it’s been a fun week anyway and we’ve covered a lot of ground.  Today I’m busy prepping and packing what [...]

It’s Not About The Skills

The number of primitive skills and survival schools has swelled in the last few years, and while all schools are not created equal there are many opportunities to learn wilderness skills these days.  It’s important to be clear about what we do because it’s different than what’s available elsewhere.  Yes, we teach skills.  We’re among [...]

We’re introducing a new format for the fall, 2009 Earth Skills Semester Program.  We’re breaking the course up into two blocks of four weeks each, with a week off in the middle.  And instead of working five days a week, we’ll be working six days a week.  With the practical exam at the end of [...]

We went out on a family tracking walk yesterday.  The snow was perfect and there were all sorts of tracks for my son to investigate.  It’s fun being outside with him and seeing the landscape through his eyes.  One of the neat things we can learn from children is the idea of vu-ja-de.  It’s the [...] 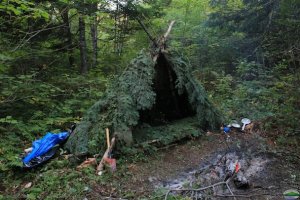 There’s a lot of information about bushcraft on the web, but much of it is focused around equipment and celebrities, not knowledge and experience.  If you’re just getting started, here are seven things to keep in mind. 1.  It’s not about the gear.  We did alright for 99% of human history without all the latest [...]

My friend David Cronenwett is the co-owner of the Wilderness Arts Institute in Montana, an experienced bushcraft instructor and a professional naturalist.  He sent me this essay he wrote about a winter survival exercise that became a wilderness survival episode last winter in Montana’s Bob Marshall Wilderness.  It’s a good read and there are lessons [...]

In preparing for our programs I always tell people to bring enough sleeping bag.  If you know you can get 8 or ten hours of warm, comfortable sleep at night most situations are tolerable.  My good friend and semester course alumnus, Sean Fagan, recently sent me a note about his experience with us in northern [...]