“Above The Gravel Bar: The Native Canoe Routes Of Maine” Book Review 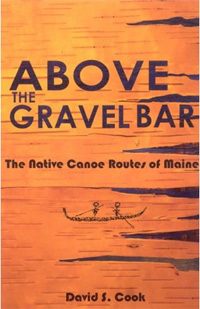 I love to research and travel on the old canoe routes that were the highways before the vast northern forests of Maine had a single logging road.  A few years ago I picked up a copy of a book called “The Indian Canoe Routes Of Maine” by David S. Cook, which described many of these trails in detail.  It was out of print but has been a favorite of mine ever since, and has been the catalyst for many daydreams about multi-drainage trips.  So it was with great surprise and excitement that I opened a package on Friday that contained an updated and back-in-print copy of the book.  The package was sent as a gift from the participants of a workshop I ran this fall.

The book, now that it’s back in print (and has been since August of 2007), is required reading for anyone who is interested in the historical canoe routes of Maine.  The new edition doesn’t have the fold-out map inside the back cover, but there are maps sprinkled throughout the pages that, when cross-referenced with the Gazetteer, allow you to trace the routes and carries.  Even if you’re just a casual visitor to Maine, this book will open your eyes to the amazing network of regional travel routes and give you some insight into the lives of those who came before.  And unlike other parts of the world where the old trails have been paved over and destroyed, many of the routes described still exist in undeveloped country, ignored for a while but waiting to be rediscovered by a new generation of travelers.

You can get a look at the table of contents and read an excerpt on it’s page at Amazon.

Previous: Jack Mountain Bushcraft To Collaborate With The University Of Maine At Presque Isle

Next: Alumni Bushcraft Practicum And Canoe Trip In July, 2009