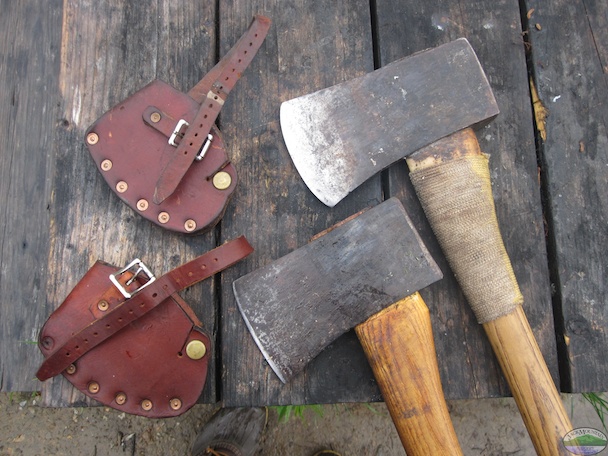 It never fails to amaze me just how pervasive and prevalent the reach of our consumer culture is these days.   Even those of us who claim to have a modicum of immunity from the world of image, identity and worth via the stuff we’ve bought, find ourselves from time to time really wanting that new trinket for reasons that are beyond conventional justification.  Here and now I confess my sins and offer up myself to the gods of consumerism to be split open and exposed on the altar of the all mighty dollar for the unrepentant consumer I am (or almost was)- all for an object that was out of date almost a half a century ago, that fills no special role in my life, and that’s only attribute falls into the regrettable category of “but it’s really cool.”

Over the course of the last 15 years I have camped, hiked, canoed, hunted, taught and lived outdoors from California to Maine.  Also over those 15 years, like most enthusiasts of any activity or hobby, I have acquired more stuff that I ever thought I’d own (thanks dad for reminding me repeatedly that I once self- righteously proclaimed that I’ll never need to own more than I can carry on my back).  Maybe that explains why I own so many backpacks- it is a subconscious way of holding true to that lovely youthful idealism, or maybe I’m just a packrat.   Either way I have a couple 5000+ CI packs, a slew of daypacks, hip bags, fanny packs (I know that means something different to you Aussies), and of course a pile of homemade bags, baskets and satchels.  There really isn’t an outdoor activity that I feel I couldn’t accommodate with the carrying capacity of my carry-all arsenal.  So why did I spend a good deal of time deciding whether or not to pony up $45 for a vintage frame pack?

That answer lies in the fact that it wasn’t just some outdated frame pack; it was a wood and canvas Trapper Nelson frame pack, ooohhh.  To those who aren’t nerdy about classic outdoor gear, back in the early 1900’s there were only a few options if you needed to haul gear through the backcountry, none of which were conducive to long hikes, big loads and comfort.  Lloyd Nelson saw that need and developed the first external frame backpack consisting of a sheet of canvas held taught by a wooden frame- the frame gives structure while the canvas sheet rests against the user’s back.  Attached to that frame is a removable canvas bag that can be taken off in order to accommodate the hauling of a nice round of fire wood, an animal carcass or any number of other things too big to fit inside the bag.  It’s a pretty cool piece of outdoor history and to this day is still a highly functional and versatile piece of outdoor gear, but why did I want that pack knowing full well I have more than enough options at home and that I could also make my own frame pack at home if the need arose?

I chalk it up to the bling factor.  No subculture is immune from having its own catalogue of items that broadcasts to others “Yeah, that’s right, I am really part of the group, possibly more than you, because I have this -fill in the blank.”  The world of traditional camping and bushcraft is no different, the only difference being that the bling usually, though not always, goes hand in hand with a higher degree of function, which is something you can’t say about the world of apparel where the blingyness seems to mean the more useless.  Look at bush knives for example: us nerdy bushcrafters and traditional campers love a good knife, and more often than not are more than eager to show said knife off and wax poetic about its superior function and construction to a crowd of glossy eyed onlookers.  Sure there is a lot to be said for a good knife, but there is a point (I’d say around $50) where you stop paying for function and start paying for bling.  But yet the admiration exists for blingy bush knives.

I think there is direct correlation between the blingyness of a person’s stuff and the amount of time they spend using, or not using, those items; the more time thinking about using the item, the more it has to bling to make up for the corollary lack of use.  Watch “Dead River Rough Cut” to see a great example of function over form with a total lack of bling, unless you consider beaver pelts bling.  Point being that when you talk to people who live the life, there is generally less emphasis on how cool an object is and more how well the object works.  Ultimately this bling thing is a very adolescent issue that should have been resolved in all of us before we were allowed to legally buy cigarettes; social acceptance and a sense of belonging and self worth.  All of these psychological issues are drivers behind the need for bling.

Now to be fair, while I don’t care a hoot to own a $500 bush knife, I did find myself embroiled in an psychological dilemma over the Trapper Nelson frame pack.  Bottom line, I wanted the pack not only because I thought it was really cool, but because I knew others would think it was really cool too-bling!  To relieve the tension, I didn’t buy the pack, whew; it is still sitting there on the rack at the used goods store calling me like the sultry siren it is.  Will I have the will power to continue resist the temptations of consumerism?  Will I be able to overcome the social pressure to buy image and style?  Will the Packers be able regroup after the last two frustrating seasons?  Ooops, didn’t mean to let that out.  Ultimately we all need to stop buying so much stuff.  I know that used gear is far better than buying new gear environmentally, but buying for the sake of acquisition or image is usually a choice you’ll regret.

P.S.  If you are interested in a Trapper Nelson pack in great shape, let me know, I’d be happy to remove that temptation from my life.

Previous: After a long build up, my son and I are sitting down to watch the movie Troll 2, the worst movie (supposedly) ever made