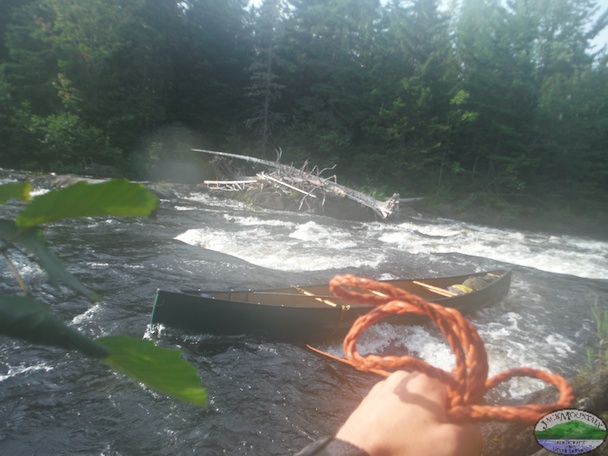 A tragedy was narrowly avoided on our recent paddling trip down Webster Stream during the Wilderness Canoe Expedition Semester. Near the end of the stream there is a half-mile carry around an unrunnable falls known as Grand Pitch. The take out is about 25 yards upstream of the horizon line for the falls, which means that you can’t see the falls, but they begin right there. It’s marked by a single metal stake in the ground. While we were there carrying our gear, one of our guys had hung his orange shirt on the metal stake. A summer camp group who had been demonstrating questionable safety practices such as staying on the river during a thunderstorm and running the class 3 ledges without scouting pulled up and began carrying their gear. Our guy was there to get his shirt, and the trip leader thanked him, saying that they would have missed the take out if it weren’t for his shirt.

I was floored when I heard this. It made me incredulous at first, and then angry. Then really pissed off.

First, it seems obvious to me that the trip leaders were not qualified or experienced enough to be in charge, as they didn’t know the river and had no idea the implications of missing that takeout. To think that there were parents at home who had put their sons in the care of this camp, and that what saved them from going over the falls was only the orange shirt from a member of our party still makes me angry. Clearly that camp needs to reevaluate their approach to safety on the river, and I will be contacting the camp director soon.

Second, most of Webster Stream runs through Baxter State Park. I understand that the park wants to maintain it as a wild river, thus minimizing the hand of man, to provide a wilderness experience, but in my opinion a small sign marking the take out and warning of the falls would not ruin anyone’s experience. On the carry trail there were logs that had fallen across the trail that had clearly been sawn and moved. I’d rather have to navigate around obstacles on the carry trail than pull dead kids from a river. They’re clearly maintaining the trail. Would a sign that could save lives really be any different? I left a voicemail for director of Baxter State Park stating my opinion on this.

Two things have been running through my head since the event. The first is what if it were my kid on that trip? The second is what if that orange shirt hadn’t been there and that group had gone over the falls and one or more kids died? It still makes me mad. It probably always will.

What do you think? Where is the line between keeping people safe versus maintaining an authentic wilderness experience?

UPDATE: I had a great talk with the director of Baxter State Park about this and they’re aware of the issue of unsafe camp groups and are internally discussing solutions.

Next: Lunch stop on a remote river