The Lost And Found Camera 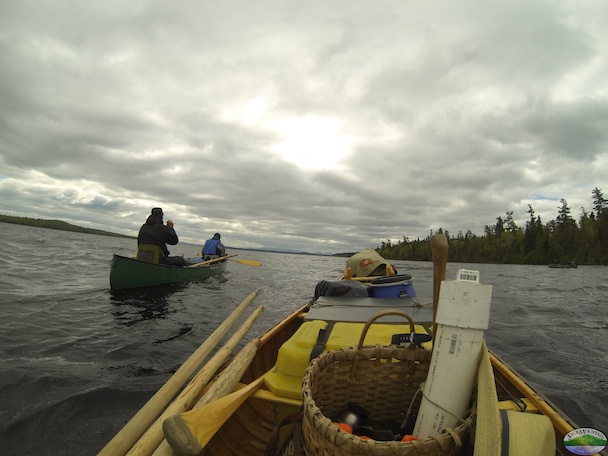 On the last day of our Aroostook River trip during our recent Wilderness Canoe Expedition Course, we stopped to have lunch at the boat ramp near the North Maine Woods gate at Oxbow.  From here, the river makes a sharp right turn, and there’s a short class 2 rapid we call Oxbow Gate Rips.  Often the most dangerous time to run a rapid is just after lunch when people are groggy and contented with full stomachs, and that day was no different.  I was the second to last boat, and after I went through the rips I stopped to wait for the last boat.  The boat didn’t come around the corner, but I started to see gear floating by.  Knowing they had flipped, I yelled to the rest of the group to pick up the floating gear, then poled back upriver to lend a hand.

They had hit the last big rock in the rip, but were already on shore and dumping the water out of the boat when I got to them.  I asked if everything was alright and was told that the new GoPro camera, which one of them had been wearing on a head strap mount during the trip, was missing.  I poled into the rip, but the glare of the sun on the water made it difficult to see anything even though the water was only a few feet deep.  After searching fruitlessly for ten minutes, I floated downstream to join the others.

The guy who had lost the camera looked like someone had run over his dog.  He had taken hundreds of photos with that camera, and now they were gone.  I told him I’d come and help him look for it; in a day we’d drive to the Oxbow boat ramp and pole around the rip when the light was better.  We had 18 more miles to travel that day, so as soon as their gear was sorted out we continued downriver.

Two afternoons later, as we were packing for our Allagash trip, five of us took four canoes to the Oxbow gate boat ramp and began looking.  I was the first one to see something.  It was the bottom of a fishing rod that had also been lost during the spill.  It was in four feet of water, just downstream from the big rock.  The light was much more diffused, which made looking into the water easier.  Still, it was difficult to see to the dark bottom of the river unless you were looking in the shadow of the canoe.

A few minutes later, about ten feet downstream of where I found the fishing rod, one of the other guys saw something reflecting light on the bottom.  It was the camera, and before long we had retrieved it.  I checked the seal and it was still good.  The camera was dry and working fine after spending 48 hours on the bottom of the river.

I was surprised we found it.  When I said I’d come and help look for it, I figured we had a 10% chance of finding it.  Needless to say the guy who lost it was on cloud 9.  After that, he continued to wear it on the head strap, but he also attached three giant orange bobbers to it.  It looked a little strange, but as he said, it would be much easier to find it it ever went in the water.