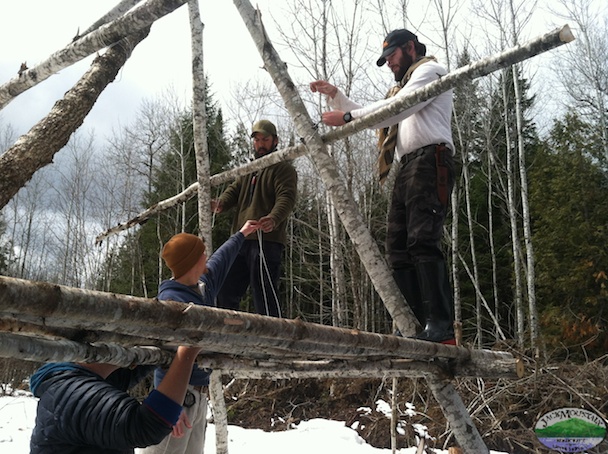 We’re three weeks into the spring semester. It was a challenging start, with our road being covered with several feet of snow and us unable to drive in for the first two weeks. It meant a lot of trips hauling gear in on sleds for the 3/4 of a mile to the paved road. Also, our internet connection, which we get through the cell tower on a mifi, went down. But the snow eventually melted, and after a replaced battery, the mifi worked again. And although it was challenging, that’s what makes us stronger.

The ice just went out of the western arm of Squapan Lake, and we’ll be hitting the water this week. When we do so, each student will be using the paddle they’ve recently carved using an axe, draw knife, spoke shave and crooked knife. They turned out great, and I can’t wait to see them in the water. I’m also excited to get out and start seeing the country. We spent most of the past three weeks in camp, and the rivers are calling to me.

This weekend I drove the six hours home to watch my son in a play. It was totally worth the drive. I was blown away by the performance. Seeing young people develop skills, abilities and confidence is an awesome thing.

Now that the technical difficulties have been resolved, I’ll be posting more often again.

Previous: In the guide shack, listening to the rain on the roof, reading a book by headlamp…

Next: Three weeks of the spring bushcraft semester finished.  Time is flying and the weather…