Sunday, February 4th, 2001 Woke up on my bed of fir boughs surrounded by other sleeping bodies. There are seven of us lying in a circle inside the round white tent. The only part of the tent floor not covered with prone bodies is the area next to the door and the small rectangular woodstove. [...] 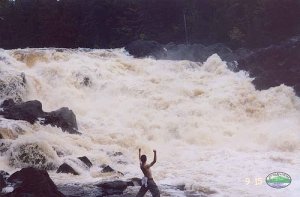 These are not good times to put out a book on edible wild plants. Unless you’re Samuel Thayer. When I reviewed Thayer’s first book, The Foragers Harvest, I wrote that it is as good or better than anything available on the topic. It has since become the go-to book for students at the Jack Mountain [...]

Paddling Into The Mist

Paddling into the mist on Long Lake, part of the Allagash Wilderness Waterway in northern Maine. Shot on a cool September morning under a clear blue sky.

Poling In The Mist

This is one of my favorite photos, taken during the fall, 2003 Wilderness Bushcraft Semester. It’s the St. Croix River, which is the border between Maine and New Brunswick. In the photo are two women poling solo in 18 foot canoes. It was a beautiful fall morning; cold and crisp, with warmer water generating the [...]

Safety and having several backup plans are key when planning a trip. We designed a form a number of years ago that students fill out as part of our guide training curriculum for each excursion. You can get a .pdf of it here. The procedure is simple: Fill out three copies. Keep one with you, [...]

Innate Vs. Learned – How We Understand Numbers Differently Than Primitive Humans

Do babies understand numbers, or are they a blank slate?  Is it a given that they will grow to understand numbers like we do, or do they need to be taught?  Is how we experience numbers different from how stone age people understood them? These questions and more are examined in this Radiolab podcast from [...]

Nutshimit is a word and concept from the Innu.  Previously known by the name given to them by the French, Montagnais, they inhabit a huge, sparsely populated region of Quebec and Labrador. For many Innu, life in the village is marked by idleness and a sense of loss and alienation, in strong contrast to being [...]

What Bushcraft Skills Are Applicable In The Modern World?

The question of how our bushcraft courses are applicable in the modern world comes up from time to time both in email and through discussions, so I wanted to formally address it today. When examined from a sufficient distance so as to blur the specific skills, our courses teach four things: problem solving, leadership, self-reliance [...]

I’ve been thinking for several years about putting together an expedition-style course for young men where we’d spend three or four weeks in the north woods canoeing and living outdoors.  It would be a similar, although less rigorous, curriculum that we use in our college semester programs, with a focus on academic subjects such as [...]

I love to explore new places.  I’ve covered a lot of northern Maine in my canoe over the last decade, and I’ve still only scratched the surface.  Sometimes I find those special spots where no one goes, the fishing is good and there’s a beautiful place to camp.  Other times I’m hauling over beaver dams [...]

Thanks to a friendly piece of software this blog is now formatted with a mobile theme for viewing with the iPhone/iPod Touch, Google Android, Palm Pre and other touch-based smartphones.

Early spring is the season of travel on remote northern rivers. Swelled with snowmelt, a canoe is able to travel where the water is too low during the summer. This is one of my favorite spots in Maine, seldom visited, far from any logging road and a long way from town or a paved road. [...]

Knowing Your Body And A New Hydration Strategy

Something we emphasize on our courses is to know yourself and how you deal with different stresses that come into play on extended trips or even when you’re just working around camp. One of the most important deals with hydration; how much water YOU need and what happens when you don’t get enough. This is [...]

When I was a kid I knew the company I wanted to work for. I knew what my job would be and the things I’d do. But I couldn’t get hired by that company because it didn’t exist. I had to build it. Here’s a timeline of some of the highlights of that journey. 1995. [...]