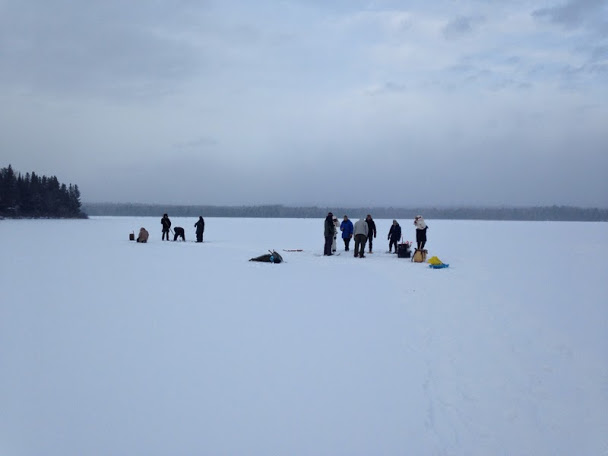 Last week we ran our first program of 2015; the Winter Woodsman course. In summing up the experience, it was cold. Really cold. -50F (with wind chill, -25 in still air at night) cold. While those temperatures aren’t unheard of on winter expeditions, the Winter Woodsman is an introductory course in living out in the winter, and as such some of the participants didn’t have their cold weather gear completely dialed in. For people without a lot of experience, it was really cold.

But depsite the cold, we pushed on and covered a lot of material. We spent a lot of time on snowshoes and snowshoeing, making simple bindings out of nylon cord. We spent a lot of time on using axes, making fire, carving feather sticks, setting up canvas tents and tent stoves, tracking mammals, baking bannock, and talking about important physiological topics such as hypothermia and dehydration. We also spent an afternoon on a nearby lake ice fishing, although we didn’t catch anything.

I was personally schooled by a fisher, initially thinking the tracks we found were left by our resident lynx. But upon further inspection, they had a fifth toe and away from where we first encountered them, the common 2-2 weasel family gait. It was a great reminder to not jump to conclusions, but instead inspect the evidence.

We enjoyed the warm comfort of the recently upgraded Guide Shack. The wood stove and insulation kept us warm and comfortable, even in the bitter cold.

One of my favorite things about running programs at the field school is that we get to simply do it. Instead of being in a warm classroom and talking about what one would do if they were in the forest, we’re in the forest and simply do it. This past week this included lots of stops to warm up toes and fingers. But the realistic lessons learned by doing are worth more, in my opinion, than hypothetical discussions.

This weekend we’re running the Winter Survival Weekend Course in NH. And hoping for weather a little bit warmer than last week.

Next: Lucky dog pouncing during a twilight walk on the pond